The Irving Society Newsletter No 64

The Irving Society Newsletter No 64

9 years ago
The Irving Society
No Comments

Michael Gaunt writes: Eleven Irving Society members were most fortunate to be part of a party booking to see Nicholas Hytner’s modern interpretation of Shakespeare’s play Othello. The performance took place on the Olivier Theatre stage in front of a capacity audience. Hytner and his team had given the play a contemporary setting. The action takes place in an overseas military base, the type of place that viewers regularly see on television news reports about conflict in the Middle East. A military advisor was brought in to ensure the accuracy of living conditions on such a base.

The set is made up of a series of ‘moveable’ rooms, in addition to impersonal exterior places around the base The rooms are advanced on to the stage and retracted according to the required location and enable the action to flow continuously. The rooms have ceilings, which at times obscure the actors’ s faces from audience members in the theatre’s upper seating. The confined space of the rooms provides a claustrophobic atmosphere and this effect adds to the isolation of the characters in a dangerous territory, while the varying lighting states suggest oppressive heat.

The audience could not doubt that the action of the play is taking place in a military base peopled by soldiers. The critical moment in Act 3, scene iii when Othello seizes Iago by the throat and says ‘Villain, be sure thou prove my love a whore. Be sure of it.…’ takes place in a functional office furnished with work-stations and computers. In Act 4 scene i, Othello hides in a WC cubicle in a washroom, to overhear Cassio apparently speaking of Desdemona to Iago ‘I think i’faith she loves me.’ Desdemona’s murder takes place in the stark married quarters in a harsh bedroom light.

There are powerful performances from Adrian Lester as Othello and Rory Kinnear as Iago. The scenes in which Iago slowly but surely undermines Othello’s trust and belief in Desdemona and stimulates his jealousy of Cassio are relentless and believable. Olivia Vinall plays Desdemona and Lyndsey Marshal is Emilia. This is a production to see if possible. It has been filmed and it will be possible to see a single showing of it in national cinemas this September.

THE BELLS – THE MUSICAL

The tiny Irving Theatre a t 17, Irving Street, Leicester Square – a stone’s throw from Sir Henry’s statue – was located in a room above a resta urant and reached by a narrow staircase at the side. This bijou theatre was created and owned by D P Chaudhuri and operated from 1951 until his death in 1964.

It existed, ostensibly as a Members Only theatre, a device designed to avoid the restrictions imposed by the Lord Chamlerlain’s Office, though these may not have been strictly adhered to.

Opera ted as an intimate revue venue, it extended its programmes to most other types of theatre entertainment including Victorian melodrama, Grand Guignol, and eventually strip shows. Many performances were late night shows which a llowed actors to attend after their own plays had ended.

On 13 October, 1955, it presented a musical version of Leopold Lewis’s The Bells, to commemorate the fiftieth anniversary of Sir Henry Irving’s death. The book was by George Edge and Margaret Morris with the lyrics by Lord Byron (sic) and George Edge and music by Reynell Wreford. Directed by Guy Vaesen, the cast consisted of:

On 14 October The Daily Telegraph reported:

The transformation (into a musical) is done with the same subtlety that invests the performance of the highly competent cast. The old ham melodrama is not visibly guyed in adapted dialogue, songs, or even score. And wisely, it is played straight. In a sense, however, it is “Hamlet without the Prince of Denmark” for the Irving part never appears on stage.

The lyrics are wittily devised,wittily sung and wittily stageed; and the direction was admirably clear. For all the tiny theatre, tiny stage and single piano for accomp animent, this was a full scale and s atisfying entertainment. The presentation of The Bells without Mathias must have raised a few eyebrows and, in any case, it is difficult to visualis e the play as “satisfying entertainment” .

It would be interesting to speculate what possible effect might be achieved by a coalition, say, of Sir Henry Irving and Andrew Lloyd Webber!

Editor’s Note: See First Knight Vol 8 No 1 (June 2004) for a report in The Building News of a High Court hearing concerning plans for the construction of an Irving Theatre in West St, London WC. The St Martin’s Theatre now occupies the site.

Two people at the [AGM] a sked if I had anything on an a ctress named Lizzie Weston. I do not know their names. Anyway, here is what I have:

Editor’s note: Lizzie Weston, née Jackson, married the English comic actor Charles J Mathews in 1858 in New York. Her subsequent career on the British stage was brilliant but brief, for after 1864 she was little seen on the boards. She died on 12 January, 1899, aged 66, and her ashes were deposited in her husband’s grave at Kensal Green. All the leading theatrical lights of the day either attended her funeral or sent tokens of esteem. Sir Henry Irving, a close friend of her husband who had died in 1878, sent a wreath inscribed: ‘In affectionate remembrance of a loved and dear friend.’ See her obituary on p.16 of The Stage, 12 January, 1899, for further details, though her first husband, the American actor A H Davenport, whom she divorced just ten days before marrying Mathews, is not mentioned.

A luncheon at La Buvette, Church Walk, Richmond, in place of the usual annual dinner. The event will include visits to the site of the Star & Garter Inn where the likes of Dickens and Irving found time to relax; St Mary’s Church where Edmund Kean is buried; the present Richmond Theatre and the site of the 18th century building; and, time and energ ies permitting, p erhaps also to St Ann’s, Kew, where Zoffany and Gainsborough are buried. Our guide will be distinguished local historian Dr David Blomfield, and th e cost including luncheon is £2 5. Full details have been emailed/posted to all members.

The AGM will be held as usual at the CAA in Bedford Street, Covent Garden, at 3.15pm aft er the tradition al wreath-laying at the Irving St atue at 2 .30pm.

Plans are being laid for an outing to Bristol, to visit the many sites there associat ed with Irv ing and the Brodribb family.

An autograph letter signed by Henry’s Irving’s elder son H B (Harry) Irving, 3pp, to ‘Dear Sir’ from South Western Hotel, Southampton, Oct. 8(?), 1907, thanking him for a letter of encouragement. Please email Elaine Adams on adamsmelaine@aol.co.uk or phone 07969 23376 5 if you wish to make an offer.

Addendum to FOR SALE Irvingite 63:

Further news of t he steel trunk made for HI’s court dress: Sir Donald Sinden reports that it was once owned by HI’s grandson, Laurence, who told him that when it was opened the clothes within had been consumed by moths. Sir Donald still has the head-dress which Laurence gave him, but what happened to the ceremonial sword?

THE MERMAID’S CAGE – a theatre play by Danielle Ross

Among the victims of the wreck of the RMS Empress of Ireland were Laurence Irving (younger son of Sir Henry) and his wife Mabel Hackney, returning home after a four month cross-Canada tour. The liner, making her ninety-sixth crossing, sank on 29 May, 1914, in only fourteen minutes, taking with her 1,012 lives.

Almost a century later, a woman returns home after serving with Médecins Sans Frontières. Suffering from post-traumatic shock, she slips off her sailboat. The current carries her to the wreck where she meets Laurence and Mabel and four fictional drowned persons.

They will learn about the Great War which broke out shortly after their ill-fated voyage. This encounter will also be a confrontation between our present-day world and the Edwardian period.

Written in French by Dan ielle Ross and translat ed by Pierre Lenoir, Montréal. A PDF of the text is posted on www.mermaids cage.ca

The Archives Hub provides a gateway to thousands of the UK’s richest archives. Representing over 220 institutions across the country, it is an effective way to discover unique and often little-known sources. Whether you are just starting out or exploring in depth, the Archives Hub can help inform your work. Thanks to the Society for Theatre Res earch for deta ils of this va luable new website. 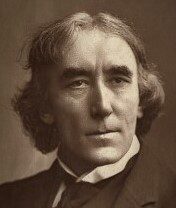 The Irving Society Newsletter No 81 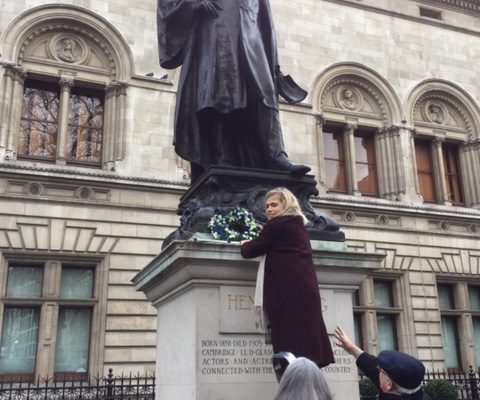 The Irving Society Newsletter No 80

The Irving Society Newsletter No 79